What to do if your pipes burst or freeze

We’re approaching the coldest time of year when homes all over the UK will suffer from frozen and burst pipes which flood properties and cause millions of pounds worth of damage. 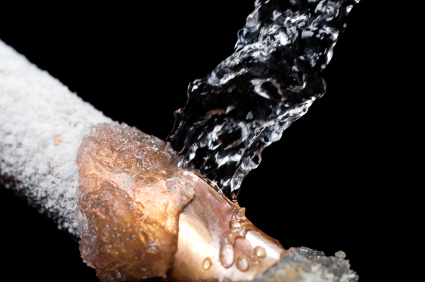 Freezing water exerts incredibly powerful pressures which can burst and block pipes, whether plastic, copper, concrete or steel. It’s one of the most common causes of claims on home insurance, but many people fail to take preventative measures, or know what to do if it happens.

– Insulate your water tank – Carefully secure a pre-formed glass fibre jacket around your water tank. You don’t want it to slip. If you have a header tank in a loft space, this should be completely enclosed.

– Lag your pipes – Any visible pipes should have insulation placed around them, preferably pre-formed foam which wraps around them. The foam should be a minimum of 50mm in diameter.

– Dripping taps – Dripping taps are one of the major causes of problems with piping in winter as they freeze easily, eventually leading to blocked pipes. Get them fixed and replace washers.

– Garden hoses – Disconnect any hoses and turn them off at the inside valve.

How to re-act to an emergency:

– Turn off the water supply – Many people don’t know where their home’s stopcock, or stoptap is it’s also called, is located (it’s often under the kitchen sink). Turning it off is the first thing you need to do if you detect a frozen pipe as it will minimize any water damage if a pipe does burst.

– Protect your possessions – Move any possessions such as furniture or clothing which are near frozen pipes in case the pipes burst. Cover your electricity mains box if the pipe is close as you don’t want water anywhere near it!

– Find the frozen pipe – Check the flow of water in areas like the bathroom, kitchen, shower rooms and downstairs toilets. Zero, or very little flow, indicates you’re near the frozen area of piping. Feel along pipes to locate frozen areas and look for bulging.

– Thaw out the pipe – Use a hairdryer or hot water bottle to help thaw out the pipe, never use a blowtorch or anything similar. Open any taps nearest to the frozen pipe as this will let the water which melts flow out.

– If you’re not sure – Call a reputable plumber if you really don’t know what you’re doing, or simply can’t find the frozen pipe.

– Drain your system – You need to get as much water out of the system as possible to prevent water from spilling through the house. Start by turning on all cold water taps and flushing toilets.

– Turn off you heating system – You need to turn off the central heating and close down the boiler. Remember to turn off immersion heaters. Once you’ve done this, drain the system still further by turning on all hot water taps.

– Switch off the electrics if necessary – If a burst pipe is near any electrical switches or fuse boxes, turn the electrics off at the mains.

– Collect the water – It seems like common sense, but you might need as many buckets, pans and any large, potential water-carrying containers to collect the water. If ceilings start to bulge, stand well back and use a long-handled implement to release the water.

– Call your insurer – Your home insurance provider will have an emergency helpline you can call. You need to tell them as soon as possible about any burst pipes if you think you might need to claim. They’ll be able to advise you on starting the claims process and how payment for repairs is going to be made.

– Record the damage – Record as much evidence as possible of the damage for use in an insurance claim. Photos are the best record you can make, but also make notes of the damage and the circumstances behind how it happened.

– Get the leak fixed – The majority of people aren’t qualified to do fix leaks themselves, so call a recommended plumber. Keep all receipts and details of work carried out.

Many insurers offer home emergency insurance for a small extra charge. It usually provides you with 24-hour call out services, and covers the cost of call out charges and repair work to piping, heating systems and boilers, up to a maximum sum.

Emergency cover certainly provides peace of mind, and could be worth considering. Ask your insurer to add it to your home cover whether you’re worried about your home’s pipework and heating system or not, as problems can flair up without any prior warning.

Our dedicated customer service team is always on hand to help – either online or over the phone. Whether you want assistance in finding the right policy or even handling a claim, we make sure it’s all handled by experts. For more information on what‘s covered under your Home Insurance policy, speak to one of our experts on 0203 014 9300 or email ask@policyexpert.co.uk

James is a journalist and digital editor with over 13 years’ experience writing and editing for media and finance businesses. He specialises in personal finance and economics, but also covers property, travel and news.