Fears that flooding will increase insurance and bring down house prices

The UK’s worst flooding in living memory is driving well-founded fears of increased costs among already cash-strapped households and could potentially bring down property prices in some areas, a survey by insurance broker Policy Expert has found. 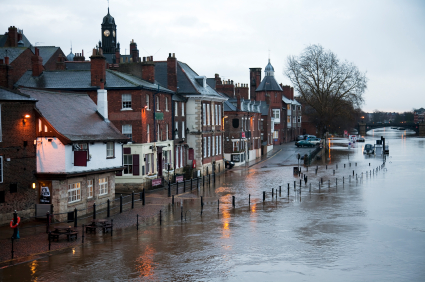 The survey, completed by 3,000 customers, showed that a majority fear they will have to set aside much more of the household budget for home cover costs than previously.
Nearly 52% felt certain that the flooding, and threat of more flooding in future, will increase their premiums considerably. In fact, experts say the recent floods will push them up by £19 over the next 12 months alone.
The rise will depend to some extent on where you live, but premium increases of 5% to 10% will be commonplace, hitting already cash-strapped households even further.
If flooding becomes more frequent and widespread, as many scientists expect, such relatively large increases could be seen regularly, on top of the usual inflation-based amounts.

House prices could be hit hard

Another, potentially more financially damaging, effect of the floods could be on the market value of people’s homes.
Not so long ago, homes built on flood plains were snapped up without much thought by buyers. But unfortunately for those who now own properties in ‘at risk’ areas, 95% of respondents said they wouldn’t ever consider buying a home built on a flood plain, with 3.5% being uncertain whether they would or not.

With the Environment Agency stating that one in six homes in England and Wales are at risk of flooding, this doesn’t bode well for the prices of those homes in ‘at risk’ areas; if flooding continues to increase in scale and impact, home buyers will no doubt become increasingly sensitive to the potential of flooding, possibly forcing down the value of homes in some areas previously thought of as ‘safe’.
And unfortunately for some property owners, many homes may become simply unsellable.

Is there anything that can be done to ensure fewer properties are flooded in future and to safeguard those homes built on existing flood plains? A number of solutions have been proposed, all of which would involve some cost to the tax-payer, but which may become a necessity if flooding gets progressively worse.

It’s generally accepted that we will need a combined approach that would include some, if not all, of the following: