Many people are unaware that the recent severe flooding seen in parts of the UK could happen to their homes too, a survey by insurancebroker Policy Expert shows. 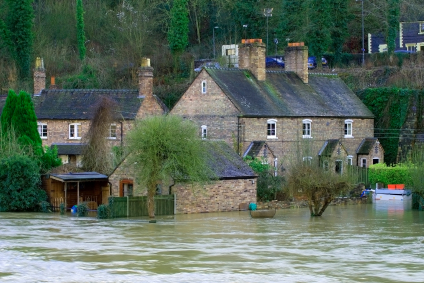 Although UK homeowners say they’re fearful of extreme weather events becoming more common, with some even considering moving abroad, a large number are unaware that their home may also be at risk from flooding.

And despite 95% of the world’s scientists now saying that global warming is largely man-made, causing extreme weather events, most people remain unconvinced.

Feeling the affects and fearful of lifestyle changes

In a survey completed by over 3,000 Policy Expert customers, one in ten said they had been directly affected by the flooding in some way, from school closures to severe travel delays and not being able to get to work.

And flooding now appears to be severely concerning many, with almost one in five of those surveyed saying they’re worried flooding and other extreme weather events will directly affect their homes and lifestyle in future.

In fact, one in eight is so worried that they would actually consider emigrating if the weather and its impact become much worse.

‘It won’t happen to me’ complacency

But the survey also revealed that there’s a feeling of ‘it won’t happen to me’ among the population when it comes to the possibility of flooding, with the vast majority thinking they’re safe; a potentially dangerous attitude to take given it’s very much at odds with the statistics.

A whopping 93% think their homes aren’t at risk, with only 1.5% accepting they are, and the rest not being sure, showing many people simply aren’t aware of the increased danger of flooding where they live.

In fact, the Environment Agency states that one in six homes are at risk of flooding, which is just under 17% of all properties.

Indeed, as you’d expect given this discrepancy between what people feel and the actual possibility of flooding, not many intend to do much to protect their homes; only 3% said they are expecting to take flood-protection measures.

This leaves a great number of UK homes that face a real chance of flooding at some stage in the future open to greater damage than is necessary.

Is global warming to blame?

The survey results also showed that the jury is still out on whether human activity is to blame for the increase in extreme weather events such as the floods.

While a large minority do feel that man-made global warming is the cause, the majority, 70%, either think it isn’t linked or aren’t sure.

However, most are united in the belief that disasters caused by the weather will increase in frequency, with 81% believing the recent floods will be repeated within the next ten years and that such events will become much more frequent.

Somewhat counter intuitively, however, given this certitude, only 6% would consider moving to higher, safer ground.

Policy Expert
We have a real passion for making sure people get the cover that’s right for them. We’re driven by a desire to help you find not only the best value deal, but the right insurance for your individual needs. For more information on home insurance, speak to one of our experts on 0203 014 9300 or email ask@policyexpert.co.uk