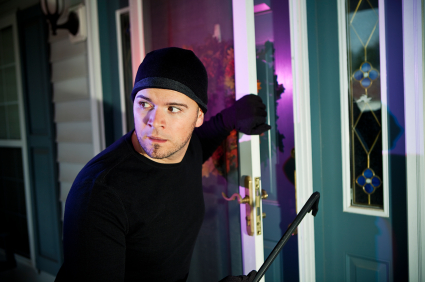 In the excitement of actually going out, 30% of the survey’s 1,374 respondents said that they had left main door unlocked at least once. And, worryingly, for 14% this had happened several times or more.

And with the football World Cup fast approaching, when many people will be watching the England games in pubs and at friends’ houses, it’s a potentially dangerous time to be forgetful when it comes to home security.

It may enthral the nation, but the World Cup also essentially provides thieves with a fantastically accurate schedule for when homes are more likely to be empty.

Thieves know the times of the big games, especially those involving England, which provides a nice little check sheet for when people might be out.

Desire for the ‘communal’ experience creates opportunities for thieves

The problem comes with the changing nature of how the World Cup is watched.

During the last tournament in South Africa, nearly 20million people watched the final England game of the competition against Germany, according to the Guardian newspaper.

While many of those watching the big World Cup games will do so from home, plenty of others will be in pubs, clubs and town squares around the country as people increasingly look for the communal tournament experience.

According to the survey, 50% say they will be watching the England games from home, leaving another 50% potentially leaving the house to watch them (or not at all, if you can’t stand football of course!).

And as Policy Expert’s survey statistics show, there’s a good chance quite a few homes will have been left accidentally unlocked while people are out enjoying supporting England. This could unfortunately invalidate home cover as the policy holder is being ‘negligent’ in their behaviour.

While the World Cup might create one-off opportunities for thieves, it’s perhaps more worrying that so many people have had major security lapses when their homes are generally left empty on a daily basis for considerable periods of time.

Policy Experts figures show that, on average, 20% leave their properties unoccupied for 6 or more hours each day.

Neighbours not as watchful during the World Cup

As with Xmas, it can be pretty clear which homes are empty during big sporting events, when the nation generally does the same thing at certain times.

But it’s not just the predictability of people’s behaviour that increases the danger of burglary. There’s a good chance people living next door might also be out, or at least glued to a TV screen in a living room.

This removes one of the best layers of burglary deterrence and prevention; the ‘nosy’ neighbour.

Perhaps in recognition of their own home security shortcomings, many people hide their more valuable personal possessions when they go out, making it harder for burglars to make hay (even if all a thief might have to potentially do to get in is try pushing on the front door!).

Cash is given the most consideration, with 46% of those surveyed hiding it away when they leave the house, closely followed by jewellery and watches, at 43%.

41% make sure they hide car keys and laptops, and 36% put iPads and other electronic tablets somewhere safe.

Plenty of people stash away financial documents, at 35%, and 10% find time to protect family heir looms .

However, 23% take a gung-ho attitude and don’t hide anything at all.

We’re here to help our customers to compare insurance products and find a policy that’s right for them. Customer care is at the heart of everything we do and we have a dedicated customer service team on hand by phone, email, twitter and instant chat. For more information speak to one of our experts on 0203 014 9300 or email ask@policyexpert.co.uk